This memoir tells the story of how one of the first five female Secret Service agents entered the clandestine world and traversed the globe guarding foreign and domestic dignitaries. With her Smith & Wesson, her radio, and her wits, Sue Ann navigated a new frontier for women. Her memoir is published in honor of the 150th anniversary of the Secret Service.

Behind the Shades tells the story of the life of a female Agent entering the male dominated world of the Secret Service. It is a story of personal sacrifice, adventure, acceptance and rejection, tenacity, endurance, and hard work during trying times. Sue Ann Baker was on the front lines of history and observed it being made on a larger scale. She is one of the pioneers who paved the way for the many capable female agents that followed in her footsteps, and I am proud to say I served with her.

Behind the Shades
is Available for Purchase! 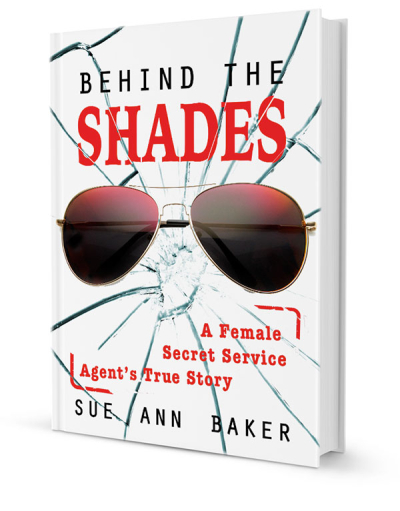 Behind the Shades is available for purchase on Amazon on paperback, hardback, and for Kindle.